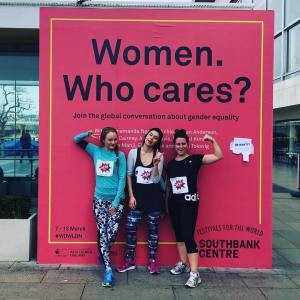 Being a somewhat unrealistic and over-ambitious 26-year old with next to no spare time, I decided to set out quite a lot of goals for myself in 2017. Some were reasonable; trying to sleep more than a restless toddler and to speak Spanish more regularly than just calling my mother madre in every text message.

If you counted stopping biting my nails, a bound-to-fail tradition I keep up purely to entertain myself, along with not straightening my hair anymore and trying to avoid the biscuit tin, I’d be so busy trying to keep my goals I’d forget to do the important things like licking the cake bowl tin, and trying to watch six seasons of Girls in one month.

Either way, I had a lot of fun on New Year’s Eve with my friends trying to outline what I want to achieve this year, the person I want to be, and apparently I didn’t drink all the gin because amongst ‘singing an entire song in public in a different accent’ lay two more realistic, helpful, turn-your-life-around kind of goals.

The first of which was to become a vegetarian. I’m now four and a bit months in, having only failed once in the first week of January when I forgot about the new me and accidentally had chicken dippers at Wetherspoons to make myself feel happier about the tube strike. Not only do I love my new diet but I’ve found it easy to commit to, satisfying in more ways than one, and guilt-free (now I can enjoy the sight of baby lambs on a hillside without feeling like a criminal.) Success.

The second goal, and shamefully not for the first time, was to do more exercise. And not only do more exercise but find a routine that I can stick to, that can become embedded in my lifestyle, to the extent that I miss it when I don’t do it. Like Twitter.

So I wasn’t asking much and it, my friends, has been easier said than done.

I used to be a sporty kid. Until the age of sixteen I was on every team at school, competed in national athletics tournaments (I know), ran without wanting to kill myself, took my swimming costume everywhere and didn’t see daily exercise as a battle. Somewhere along the line of studying more, taking up drama full-time instead, losing my confidence and not wanting to be sweaty and ginger, simply losing interest, meant I left that lifestyle behind.

Fast-forward a decade and I was a different person. Whilst I still walked a lot, did the occasional set of abs exercises when it became an emergency the day before a holiday, ran around Clapham Common every now and then but often got distracted by the ice cream van, tried to run up the escalators on a good day, and did a bit of yoga when my head was overflowing, I wasn’t exactly in shape. And something about naturally having a flat stomach when it isn’t disguised by an IBS food baby means you forget you might not be the healthiest person on the planet.

Over a period of time, you start looking in the mirror and thinking you could do better. That determination increases ten-fold when someone you know gets seriously ill, and suddenly you want to start looking after yourself a bit more, basically because I’m very sensitive when it comes to doctors judging me.

I kept hearing about how running, or any form of activity that isn’t Netflix, is not only good for your heart and your muscles, but also for your brain, your posture, your skin, your digestion; basically all the things I haven’t exactly got under control. I’m easily influenced, so when Lena Dunham starts talking about how running has been the most effective cure for her anxiety, or some fresh-faced Youtuber puts her clear skin down to cardio, I get swayed.

Suddenly I don’t want to be that person who’s proud of staying thin without doing any exercise. I want to be the person whose muscles ache from a weekend workout, whose heart is healthy, who has good stamina for drunk rounders in the summer, whose doing everything she can to grab life by the balls and live it in the best way.

So where did that leave me?

Well, I had a long way to go. This is coming from someone who used to put that Cocoa Butter Toning moisturiser on nightly in an effort to try and get a firmer bum. Who burnt most of her calories sneezing on a high pollen day, or trying to get into a tight pair of jeans. Who wrote a blog called “24 things to do instead of going for a run” that included writing a musical and making a toothpaste mural.

I’ve learned it’s as much a psychological battle as anything else. So in January I did two things to win over my mind. I downloaded Couch to 5k, in an effort to start over again, build up stamina properly, stop giving up at a stitch, and compete with myself. And I bought a whole load of new exercise gear, because it turns out the most effective thing to get me out the door is guilt that I’ve spent money on a new sports bra and not used it enough.

Reader, it has worked.

Now I’m not encouraging you to go and spend all your money in TK Maxx because I don’t get paid for that but it was the push I needed. Part of the problem in the past was every time I tried to do more than walk around Clapham Common I was ending up with shin splints, sore ankles and clicky knees. Which are all nice excuses to order Dominos instead but also rather inconvenient.

So this time I went to Runners Direct and got my gait tested, which involves running on a treadmill in front of a lanky eighteen-year old who tells you your knees and ankles are not aligned, before prescribing you the most unattractive, bulky, electric blue trainers in the home counties.

I’m not lying when I say these trainers not only look worse than bowling shoes but are so bright it’s possible for someone at the top of the Shard to point and laugh at you. And you have to pay for them. But, sigh, they work, the eighteen-year old knows his stuff. I can run without feeling snappy or pained the next day and apparently you’re not supposed to look good running anyway, who knew?

And despite just gagging a bit because I sound like such a wanker, I really love Couch to 5k. It’s got into that part of my psyche that makes me hate it as much as I love it, I have to obey it, and it’s mildly manipulative but in quite an alluring way. Basically it’s the most complicated relationship I’ve had in my life but four months on and something inside me has changed.

Yesterday was Easter Day, a day I used to reserve for bingeing and perhaps a stroll around the local duck pond if I felt particularly ambitious, but I forced myself to get up and run, dragging Eduardo with me so he could yell at me when I try to hide behind the children on the swings. I just went on the most active holiday of my life, where if we weren’t surfing or hiking, we were playing tennis and kayaking, and, again, I felt something shift in my attitude towards everything. I like being this active, and I like feeling noticeably fitter. Ed no longer has to tempt me up the side of a mountain with Haribo which means we save at least one Euro every trip.

At the risk of sounding like the next Rebecca Adlington, I want to start strength training; four months ago I didn’t know what that was and would have taken a guess at it being a kind of advanced hair conditioner for brittle ends. Because it’s fine being able to run 5K without stopping (I say that hypothetically, I still need an inhaler and to be slightly drunk to achieve that), but I’d quite like to be able to do a press-up just in case I change my mind about working in theatre and want to join the army, or something. I’d quite like to know what it feels like to have definition in my arms, to carry a rucksack to work without my back caving in, to have strong thighs so I can pin my boyfriend down on the floor and steal the remote.

The thing about exercise is that it can feel like slow progress. I find running in the morning really difficult, so much harder than in the evening, partly because my antihistamines haven’t kicked in and also because I’m still half-asleep, and every time I force myself to go out I feel terrible, like I’ve taken ten steps back. Similarly, the other day I looked at myself in a wetsuit and thought, why do I not looking like a surfer babe yet? But the problem is, no one actually looks good in a wetsuit and I can’t really surf, so it was unfair to ask myself that question.

The reason I’m writing all this down is twofold. Firstly, I’m really only at the start of all this and need as much help as I can get; I need to be able to read this back to myself when I feel less enthused about going out in the rain, or testing out the weights at the gym in front of scary gym people, because I’ll be letting down my audience (of approximately two people) if I give in. Secondly, if there is anyone else out there who is as easily influenced as me, and also wanting to integrate a bit of movement into your routine without becoming a dickhead or exhausted, perhaps this will help.

It’s really hard to commit to doing exercise when you have a life. I’m out of the house at work for at least eleven hours a day, and if I’m not seeing plays in the evening, I’m rehearsing or doing my improvisation class, or am too tired to function, let alone do up the laces on my trainers. Summer helps; on an evening off I am better at forcing myself to get some fresh air because it eases off that feeling of being trapped in an office all day, and I’ve started enjoying morning runs at the weekend because it means I can eat the entire contents of the fridge for the rest of the day.

I love food, I think about it all the time, am queen of snacks, work my holidays around it, sometimes think I might like to marry a pain au raisin, and the thought of it is pretty much the only thing that gets me around a park run. Never have I wanted to become a person who thinks twice before having a second cookie, or who honestly chooses nuts as their favourite snack, but I do see the plus side of being a little more balanced.

Kate Moss once got in a shit load of trouble for saying “nothing tastes better than thin feels” which is completely mad, because croissants are heaven, and feeling your hip bones dig into a sun lounger is unbelievably shit and leaves you with an uneven tan because you can only lie on your front for approximately seven seconds. So in the sense of cancelling out her motto, here’s mine: “nothing tastes better than eating an entire cherry pound cake after panting round your local park for half an hour like an arthritic gorilla.”