This trip to Australia has played with my emotions so much I genuinely think it’s the cause of all my split ends. All the ups and downs of travelling are frazzling my head, my heart and my hair.

Today, for my last day in Sydney, I went for breakfast pancakes at The Rocks, a little boutique collection of cafes and markets adjacent to Sydney Harbour, in a cobbled street that sings of sailors past, where you can daydream away the day watching the world’s largest cruise ships coming and going with the ease and grace of giant swans.

After gorging on maple syrup and ice cream like we both had a burning desire to get diabetes before 10am Tamar and I made plans for the rest of our lives and life felt really good. We walked along the harbour to the Opera House to say hello to my favourite sunbathing seal and I felt totally at peace, admitting to Tam that the last week had been the point in my trip I’d been waiting for; the stepping stones towards clarification and inspiration.

I’m not someone who often stops to pause and enjoy being happy. I frequent a habit of dread far more and imagine the worst things that could happen on a daily basis. Consequently even when I do stop to appreciate the little things I inwardly prepare myself for imminent tragedy around the corner, whether it’s burned toast or a faulty plane. When I forget to do this, crisis finds me. It’s something I’m working on, let’s leave it that, but I have a case in point.

Tamar and I said a rushed goodbye so I could leg it in flipflops to the ferry to Manly, a seaside town about a half hour boat ride from the city, where there is good surf for beginners and happy hour ice cream for me. Because I seem to have pulled every muscle in my body after tackling the Blue Mountains yesterday, the image of me running to make it onto the ferry in time was, I imagine, for all the other passengers looking on, like watching a large flightless and arthritic bird, desperate to take off, whilst the other successful birds flap above in the upper decks in a gaggle of despair and impatience.

I didn’t care. I made it. I was unbreakably happy. Maple syrup does that. I sat down and got my phone out to start writing the happiest blog in the entire universe, making a list of all the things I was so excited about, challenges to myself, dreams I wanted to keep, an entire post dedicated to the splendour of the mountains yesterday, and an open resolution really not to eat so much ice cream.

And then my phone died.

It seems the excessive amount of photographs I took of the seal caused it to spark, burn and melt in the centre. Either that or it anticipated the bragging, sickening happiness I was about to spill in Notes and it had an embolism from the shame.

Either way it was dead. And absolutely burning hot. It was frazzled just like the rest of me.

And that’s how it happened. I fell from grace. I went from inspired and improved and floating around on a little cloud of waterfalls and mountain views and maple syrup and sailors to crying on an old man who was wearing flipflops and socks at the same time, which is never ideal, in a seaside phone repair shop, begging him to save all my travel photos and put me back in touch with reality, promising never to indulge in seals ever again if it meant I could have my one true necessity back in my life.

Two painstaking hours later he fixed it (Kevin Yang – you are the from-now-on unsung hero of this story) and I could continue my day as planned.

I’m not a professional blogger. I tweet fairly frequently if there’s a big theatrical event or I want to show off my seal or similar. I do go on Facebook too much and probably overshare. You tell me. I don’t have Instagram or LinkedIn or Pinterest or GoPro or Wonderbra or any of these other things. My email accounts are a mess. I do use Whatsapp every day either to tell Ed I love him or my friends that I miss them or my parents that something has gone wrong and I need them. I admit I have taken too many selfies on this trip but in my defence kangaroos aren’t going to market themselves.

Taking all this into account I definitely definitely definitely should not feel like my world is caving in when my phone overheats. Or I shouldn’t panic so much when I think I’ve lost it and it’s just hidden inside my Aquarium leaflet. When I got off the ferry and legged it to the repair shop, this time like a large flightless bird clutching one of its injured young in its limp, inefficient wing, I was crumbling inside because I hated myself so much for not being strong and cool enough to just chill out and go to the beach and make do with an old fashioned map and perhaps send Ed a postcard saying I love you and my parents an urgent carrier pigeon begging for financial relief.

As I write this my phone just crashed again – this time I was going on to Twitter as I can see my friend Charlotte (by the way, this is for your Dad) has tweeted the picture of the seal. Guys, let me just say it now. We all need to stop reposting the seal. Clearly it is immensely destructive.

So now it’s my last day in Sydney and I’m panicking that I have to get a plane tomorrow and won’t be able to talk to anyone before I take off, which for someone with the same morbid attitude to flying as me, is the equivalent of refusing them any last words with their loved ones before they hang. I’m worrying still that I’m going to lose all my photos again as every time I back it up it gets terribly hot again and that can’t just be because my selfies are smokin’. And I did genuinely spend the last of my emergency fund on Kevin and his phone skills, so next time it breaks would mean selling a kidney or holding a rare Manly water dragon hostage if I want any hope of life with a working iPhone.

I have nine days left in Australia. I really would love to come home to England less reliant on technology and more confident at being truly alone. I’d also like to come home less anxious and with a more positive attitude and those aims are currently at odds with each other. Because I wrote in my last post that I felt safe and at home in the company of that seal. And now because of the bastard seal I felt and may continue to feel more far away and isolated than ever before.

This is the world we live in. We must not let the seal break us. We need to break the seal. As of today it’s become a metaphor for how simultaneously harmful and comforting technology and social media is to me. I’m aware writing this that I may have gone crazy. I think I’m too far in. You have been warned. Until next time lovers xx

Oh. This is the seal. 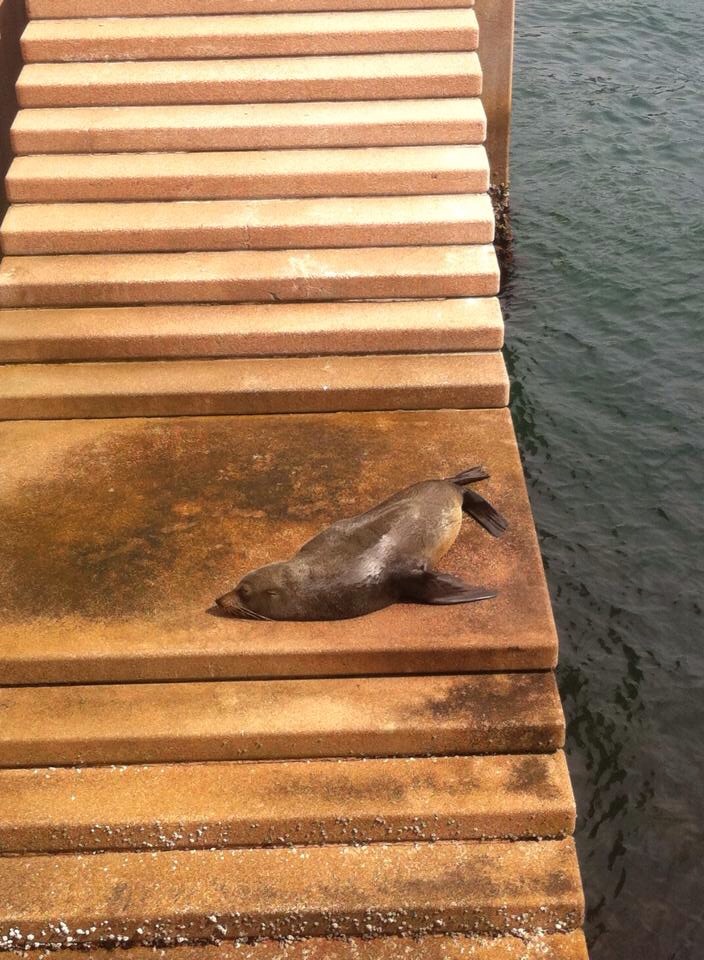