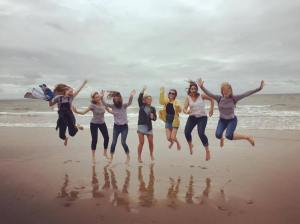 Oh hi there, friends. Welcome back to the second instalment of SDOATG (I know, I’m not supposed to include the O and the A, but I love vowels too much, just shoot me.)

Right now it’s Sunday evening and I’m in bed not watching Game of Thrones. I’m also putting off washing my hair. I don’t know about you but washing my hair is definitely one of my top five most hated activities, beating smear tests (although not colposcopies), getting wax in places I shouldn’t, reading “I’m so pleased to finally be able to announce” social media updates, and trying to swallow big mushrooms.

Once I can no longer get away with dry shampooing the shit out of it so I look like a cross between an old dish sponge and a ginger Severus Snape, I enter the same phase of stress normal people might get before deciding whether to jump out of a plane, or drag themselves into a sexual health clinic. And then proceeds an arduous, painful discussion, sometimes in my own head, and sometimes with Eduardo if he’s unfortunate enough to be in the vicinity, where I have to talk myself into getting in the shower.

This has been a bit of a mad week, guys. It took me approximately ten days to get over a summer cold. A summer cold. Obviously I googled why we get colds in summer, just to check it wasn’t meningitis (turns out the reason I had a headache and couldn’t look at the light is because the cure for a summer cold is 2000mg a day of vitamin C, not back to back episodes of Glow). Anyway, apparently one reason can be exercise, so I’ve decided I’m going to try and stay in shape by sneezing as regularly as possible instead.

We’ve just come back from a wedding weekend in Wales (literally just did a mini orgasm from that alliteration – anyone else?) which was fun for so many reasons; being reunited with a million school friends, having a nest of baby birds above our bnb, celebrating love and all that jazz, and the fact the weather was forecast to be so unbelievably poor on Thursday night Eduardo and I had to cancel camping and become extremely basic instead. 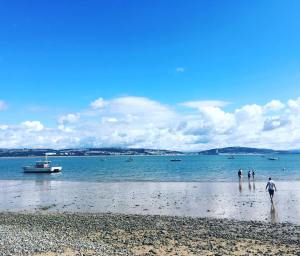 We booked a last minute discounted spa hotel in Cardiff like absolute Kardashians and I had my first ever steam room experience. I spent the first five minutes freaking out that this how Chandler feels in that steam room episode of Friends, and then realised I don’t like steam rooms. Seriously, it’s like being in a kettle, but with less dignity. The sauna isn’t any better, in fact, I think it’s worse. There’s an element of novelty to a steam room; the aforementioned Friends nostalgia, and the fact it reminds me of when I take food out of the oven with my glasses on. Whereas a sauna is everything that’s terrible about sunbathing without any prospect of a tan.

Give me a pool and some goggles any day. We also booked in for breakfast, because when in Rome, and they had an unlimited supply of croissants and a vat of porridge. So I got to live out my dream of eating pastry until I have to lie down, at the same time as pretending I’m in Oliver Twist.

It’s fun hanging out with Ed outside of our house, and Tesco. I mean, this summer has officially bankrupted us, and what with holidays, three weddings in a row, and the fact that he has to get physio for his old man joints and I have to buy endless amounts of Sudocrem for my adult acne, I’m not sure how much we’re going to be able to lark about like celebrities in Wales come autumn.

But right now, I’m grateful. For the fact that we somehow managed to escape a nine-hour traffic jam to Swansea. That the sun came out and we got a swim in the sea. That we got a whole weekend with some of our favourite people, on the beach. That I got to listen to Celine Dion and Delta Goodrem the whole way. That I’m finally not coughing my guts up like I smoke a pack a day. This week is another crazy one. Back to work. A trip to the theatre. Another wedding on the horizon, which I’m so excited for I might even get my eyebrows tinted.

It’s also my uncle’s birthday this week, and amongst all the sun, and the celebrations, and the inevitable food babies, every single day without fail I think of him. This will be an extra special week, of raising a glass to a phenomenal man who left us way too soon. And although someone wonderful and unforgettable is missing, he has also left me feeling so full, lucky, honoured to have known him. So cheers to a week of spending time with the people we love, good road trip snacks, keeping hydrated, free Prosecco, and singing songs for the ones who might not be with us on the dance floor, in the car, on the end of the phone, but who are definitely, without a doubt, still here.